Work on the pond expansion moved along swimmingly. You've probably noticed that I started digging without draining the old pond. I really didn't have a plan for temporary fish quarters yet and there was plenty of digging to do before I got to that spot.

Also there's the matter of that huge boulder uncovered on the edge of the pond. It's a little under two feet in diameter and almost three feet long. I'm hoping the pond gnomes move it some mid-summer night whilst I sleep. All of the other sizable rocks are being used to construct the hill.

Here in New England every yard project involves rocks: getting them out of the way or using them for decoration. 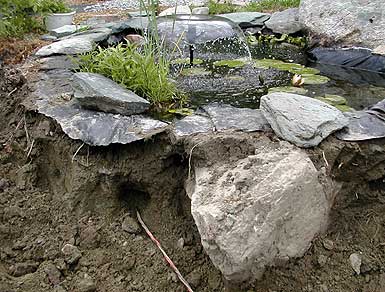 Closely studying the photo you'll note a rather large, multi-colored strand of electrical wiring seemingly come out of the old pond. It's not. Coming from the old pond, that is. It's the 240vac line from our well pump and it runs underground another 30 feet or so.

For now I'll mostly ignore the high voltage cable and concentrate on getting the pond perimeter dug. In the next week or so the fish are going to be need a place to live so I can drain the old pond and dismantle it.