One night while relaxing after an evening's shoveling I read the Savio manual. I'm not much of a manual reader but it was a slow night so what the heck.

The first page I turned to said something like "place the waterfall in a location with a good view so you can appreciate it." Well, yeah, that sounds obvious and off I went to read other sections.

The next morning, while surveying the job site from the porch it hit me, "with a good view." Oh, no!!

I had placed the hill without even thinking about the view from the porch. All of the planning and layout had been done while down in the pond area. From the porch the waterfall would be almost invisible.

That is when I started work on Hill #2. 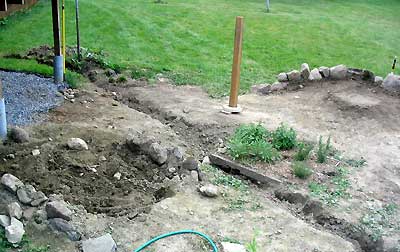 The photo was taken after Hill #1 was almost completely moved to Hill #2, which is on the right side. I'd like to say it was a labor of love or that I learned much from my mistake, but mostly it was just sad, hard work.

But enough about moving hills, let's talk about some of the other things in the picture. That large upright four-by-four in the middle of the picture is my homemade dirt tamper. The 4x4 was laying around the garage, which is why I used it for the upright. If you are going to make your own use something which is easier to hold.

That funny looking ditch running diagonally across the screen is Project #3 - Well Re-Wiring. Turns out the wire comes out of the house in a nice water pipe conduit for about four feet and then runs bare until it is within four feet of the well head.

I haven't figured out the particulars yet, but the plan is to run brand new wire along with an extra wire bundle for the pond gear, all through some sort of conduit.

Finally the photo shows a spot on the new hill for the Savio Waterfall. It's a square leveled area that sort of looks like a mini-helicoper landing pad. The water fall goes here, plastic piping is connected to it, and then it essentially gets buried.