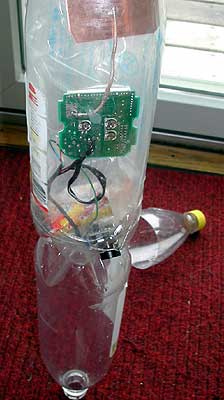 Remember a few years back when every site was covered with crazy X10 popup ads? That was my fault. I bought a wireless camera from them and they used the sixty bucks to buy ten million internet ads.

I eventually put the camera to good use. After a severe dissection the camera guts were put into a 1 liter bottle, much like the old ship-in-a-bottle kits. A hole was cut for the lens to stick out and a little external switch was mounted for turning the power on and off. I also confirmed that a 9 volt battery works in lieu of the 12 volts the camera prefers.

The camera recorded the amazing flight in color and with sound.

Here's a link to the Water Rocket Movie in case you don't see it in your browser window below.

If you've never seen a water rocket launch you might be surprised, heck I was surprised and I've launched a bunch of them. Be sure to step through the movie frame by frame after you watch it to see some of the views. There are two launches, after that it had to go back to the workshop for wire re-soldering.


By the way the sound is from the wireless camera's microphone. I know, it sounds like a real rocket. Here's the view from the rocket in case you can't view the movie: 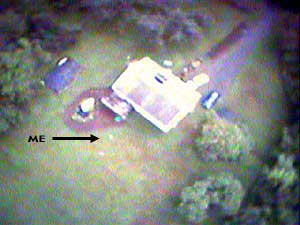 The first shot buried the tip of the rocket two inches in the ground and popped the little Amazon shipping airbag I had used to cushion and isolate the parts. I replaced that with a chunk of packing foam. Also turned off the house wireless phone since it caused camera interference. The second launch was a beautiful thing. Straight up, barely any spin, and then it turned ugly as the rocket slammed into the woods and self-destructed.

Here's the rocket after the last launch. The rocket is in great shape, but the electronics sort of pulled themselves apart. You can see that it is one of my earlier modular systems. When you slam rockets two inches into the ground on a regular basis you need to use interchangeable parts. 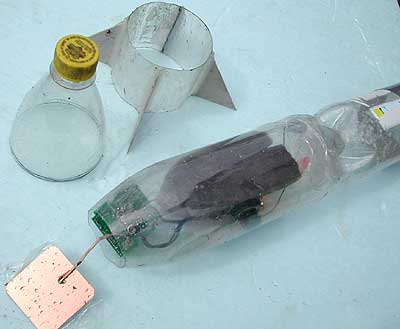