The launcher is really the mission control of your water rocket setup. It's the focal point for holding a rocket in place, pressurizing it, and providing initial vertical guidance. Plus it's an opportunity to showcase your Rube Goldberg tendencies.

If you explore the launcher links below you'll find launchers made from copper pipe, pvc or cpvc pipe, and even some without a pipe. As you can see, the launcher is wide open to experimentation and improvement.

Making a water rocket launcher seems a lot like plumbing. In fact if you have a friend or neighbor who's a plumber you might want to rummage through their scrap box for parts and invite them to help with the design. 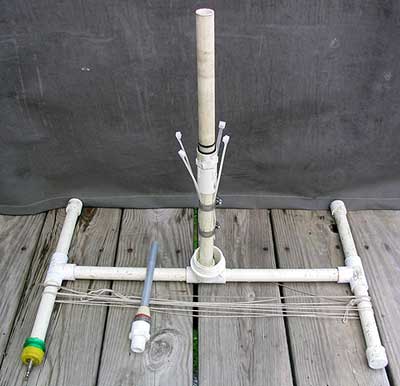 The launcher I have the most experience with is made out of Schedule 40 CPVC (not to be confused with PVC: a pop bottle neck slides snugly over the pipe). The pipe is cut and glued together with PVC cement to form an H shaped base with a launch tube riser. One leg of the base is retrofitted to take a hose or nozzle adaptor for the air pump. Remember, all of these parts will be under the same pressure as the bottle so be thorough when cleaning and gluing.

I won't go into the exact details of building a launcher, there's a pile of great plans to choose from, but I will share my experience so far.

The cable tie launcher has been pretty reliable. It can be a little fussy at times trying to keep the cable "lock-downs" in place, at least until there's a few pounds of back pressure from the bottle. And we haven't found a perfect rubber gasket for keeping the bottle sealed onto the pipe, usually it takes some sanding and swearing to get it just so.

I like the idea of having the water hose optionally connected to the launcher, one less step and less water splashing about during setup. Another interesting idea and one that I've retrofitted onto my launcher is interchangeable launch tubes. Using a CPVC threaded male/female adaptors you can make a variety of launch heads and change them out pretty quickly. Use teflon tape on the threads.

Pictured above, laying on the ground, is a reduced nozzle launch head I've been experimenting with. So far the results haven't been very good. I think it's a matter of moving the rocket's center of gravity further back. The rocket nozzle is from water bottles with a snap top closure, drilled out they are about half an inch in diameter.

We use a string so we can launch from a safe distance. It can get yanked pretty hard by excited young rocketeers launching their first rocket. Setting a heavy rock on the base makes a good anchor. Obviously we didn't use a rock in the photo below.