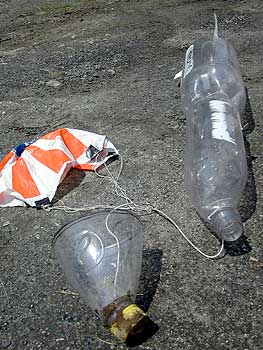 If it were possible for an inanimate object to wear an expression I think this parachute would be downcast and slumping ineffective shoulders in shame.

Buoyed by the successful water rocket movie I was determined to find a reliable parachute solution so we could enjoy longer in-flight movies. As you can see, there's still much to be done.

On the first launch the chute deployed early and pulled its strings off. The second launch was encouraging: the parachute deployed after apogee and brought the test vehicle down in an orderly fashion. The third launch (higher, faster, better!) saw the cone and parachute firmly attached to the rocket nose the full trip and a screaming (me, not it) plummet to earth.

If you search the web for water rockets you'll find as many attempts at parachute deployment as there are rocket types. I had a plan. Considering the amount of gluing and 'rigging it took, it was more of an over-engineered fiasco than a plan.

Two attempts (battery out) and each one still deployed early, maybe even earlier than before. Most frustrating. Since I was doing all of this by myself I used little strips of duct tape to hold the cone on while I filled the rocket with water and positioned it.

On the third shot I purposely failed to take them off. Since they fell off with the slightest provocation I figured they wouldn't make it past takeoff.

A beautiful launch, straight up and straight back down, with me standing there swearing and praying, neither of which budged the parachute or lessened the impact.

Obviously I am not the one to turn to for recovery advice. Check out the links for better ideas.