I have received some great feedback on this article. One person pointed out:

A softbox is a combined reflector and diffusion panel, with low spill. Like a black dome tent in many cases, into which one or light heads can be mounted. The light produced emerges from the "ground sheet" of this tent.

The type of structure you have made is generally called a light tent, I guess yours is like a light trailer or winnebago, with its hard sided construction ;o)

Seems that a softbox is typically attached to the light itself, so my design is more of an inside-out softbox.

When I first posted the article the light bulb in the first image had four pretty strong reflections on it. The shadows were soft, but obviously I had completely overlooked the reflective surface. Members of the DPReview forums jumped in with some suggestions.

One person suggested using Rosco Tough Rolux #3000, which you can find here. At a hundred bucks or so a pop this pretty much dwarfs our other lighting expenses. Instead I grabbed a piece of "clear" plastic sheet that we had purchased for some other house project. It's a pretty thick gauge, like four or five sheets of paper thick, and more of a faint milky white than clear. Placing one or more sheets between the lights and the box seem to do a great job in diffusing the light.

Another thing that helps with reflective subjects is to close off the front of the box. There's a couple of ways to do this. A full sheet of the foam board could be used with a hole cut in the center for the lens and then pressed against (taped?) the opening. Alternately more of the white cloth can be draped over the opening, much like what I described for shooting insects. All of this helps to prevent anything except a smooth, white surface from reflecting off the subject.

A few people pointed out alternate designs. There are some really good ones out there. Although I'm kind of partial to my light box I can see the strengths of the other designs. Check out the resource links for a few others, or google it:

Finally someone over at Nikonians was curious what it would look like photographing flowers with only a top light and a black background. Here's a quick photo of just that. 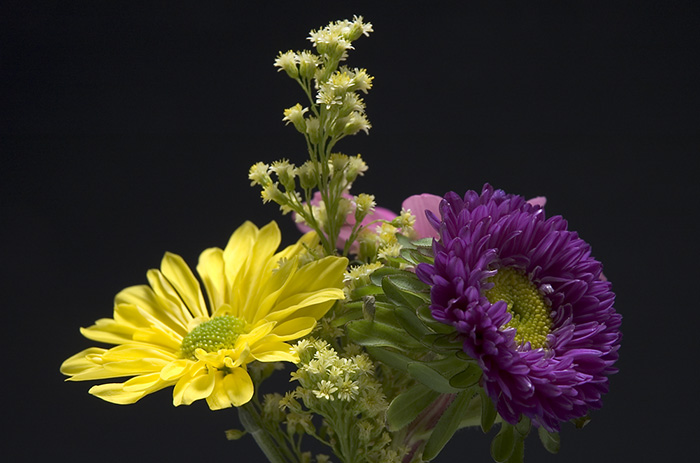 Thanks to everyone for the great feedback!